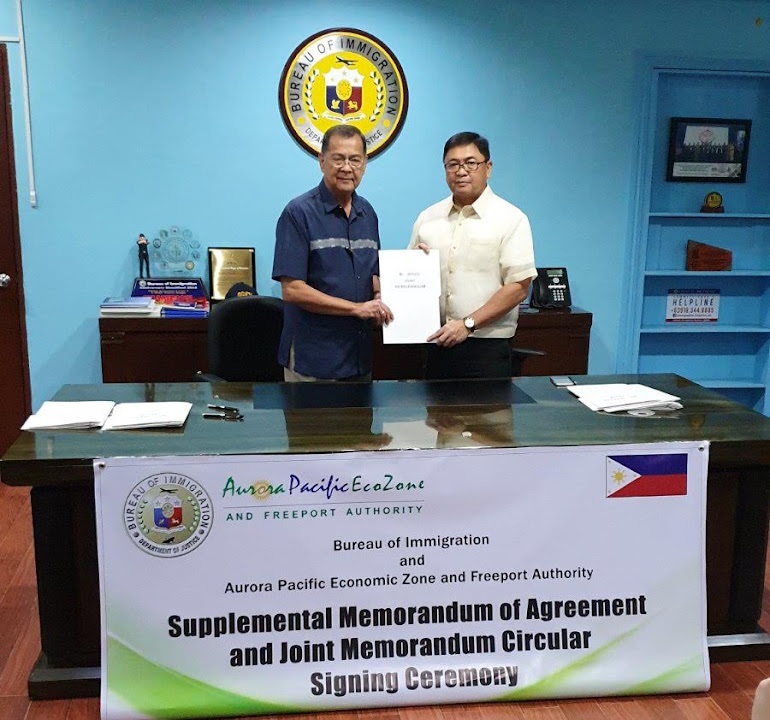 On 10 September 2019, the Bureau of Immigration (BI) and Aurora Pacific Economic Zone and Freeport Authority (APECO) entered into an agreement to further harmonize their respective mandates in order to avoid overlapping of powers and functions on matters of Rules and Procedures in the issuance of visas.

In a simple ceremony held last 10 September 2019 at the BI office in Intramuros, Manila, the two agencies formalized its cooperation and collaboration by jointly signing a Supplemental Memorandum of Agreement and Joint Memorandum Order outlining the administrative and operational procedures in the processing and approval of APECO visas.

These documents provide that APECO shall be allowed by BI to receive and process application of the following:

Under such agreement, the BI shall:

1. Allow and admit APECO prospective foreign residents, investors, workers and temporary visitors (tourists) through the issuance of a Single-Entry Visa Upon Arrival (SEVUA) with an initial authorized stay of seven (7) days, provided:

2. Upon endorsement by APECO, allow a maximum of two (2) extensions of the SEVUA of not more than thirty (30) days authorized stay payment of prescribed fees and compliance with existing BI rules and regulations.

4. Recognize APECO’s authority to issue APECO Special Work Permit (PWP) and APECO Provisional Work Permit (PWP) to holders of BI-issued SEVUA upon issuance of derogatory clearance from BI and upon compliance with the 01May 2019 DOLE, DOJ BI, BIR Joint Guidelines on the issuance of work and employment permits to foreigner. The validity of said SWP and PWP shall not exceed six (6) months.

5. Recognize the authority of APECO under Republic Act 9490, as amended by RA 10083 and its “2018 Rules and Regulations on APECO holders as among the immigration and travel documents required for their entry to, stay in, and exit from the country.

6. Establish a BI-APECO Field Office within the jurisdiction of APEZF or in APECO satellite office and deploy and assign adequate BI personnel thereto to service the immigration requirements of APECO and its registered locators, foreign residents, investors, workers and temporary visitors (tourists) thereat within its territorial jurisdiction in Aurora Ecozone consistent with the 12 October 2016 DOJ Memorandum.

The agreement also mandates that BI-APECO Field Office be set up within the jurisdiction of APECO or in its satellite office. BI personnel shall be assigned in this office to service the immigration requirements of APECO and its registered locators, foreign residents, investors, workers and temporary visitors.